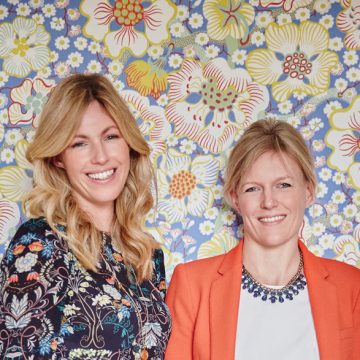 The Bump Class was founded in 2015 by sisters Marina Fogle and Dr Chiara Hunt. With young children and a group of friends and – in Chiara’s case – patients desperate for honest, professional guidance on becoming a parent, the sisters gathered a crack team of experts who, over the course of 8 classes, would give evidence based advice about pregnancy, birth and parenting. Hailed by The Times as ‘revolutionary’ and ‘empowering’, The Bump Class quickly became the most popular antenatal class in London, with over-subscribed classes and litanies of positive feedback and grateful Bump Class girls.

The Bump Class; An Expert Guide to Pregnancy, Birth and Beyond was a bestseller and the sisters now produce a chart topping podcast, The Parent Hood, in which experts discuss parenting from pre-conception to the teenage years, with everything in between.

Marina Fogle never expected to love being a mother; she was always much more affectionate towards puppies rather than babies. But when her son Ludo arrived, she soon realised that the more you know, the more expert advice you have the benefit of, the better parent you can be. Fortunately, her sister, Chiara, is a GP and the fount of much knowledge, but she felt guilty that not every mother had this benefit. And so the sisters decided to start The Bump Class, to give expert, evidence based advice to mothers to be, to empower them and give them the confidence to really enjoy being parents.

Marina writes regularly for a variety of publications including The Telegraph, The Times and The Daily Mail. She produces the chart-topping podcast The Parent Hood and more recently, As Good As It Gets.

Marina is married to the adventurer and broadcaster Ben Fogle. They live in west London with their two children, Ludo, Iona and an ever expanding menagerie of pets, which her children said they’d look after, but don’t.

Dr Chiara Hunt, MBBS BSc MRCGP DFSRH studied an Imperial College and then worked at St Mary’s Paddington and the Chelsea and Westminster, before quickly releasing that her special interest lay in treating families. After becoming a mother to Otto and Ivy, Chiara became even more determined to develop an expertise in treating pregnant and postnatal women and their babies. Her working life is divided between seeing patients at the Sloane Street Surgery and teaching at The Bump Class. She lives in London with her two children and her husband.

When one becomes two

There was a worrying time a few years ago when I realised with a shudder that there was another girl in my husband’s life.  She’d been around for a while but I’d started noticing how desperately she was vying for his affection and subtly doing all she could to prevent the two us from having […]

Need to ask a question
before booking?
Contact your expert here with
any general questions about
your booking for free
Login to chat

Use a social account for faster login or easy registration.