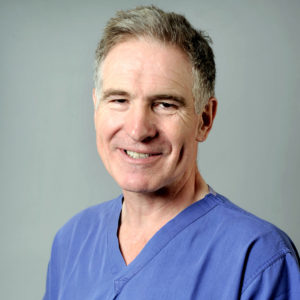 Professor Johnson is a Consultant Obstetrician based at Chelsea and Westminster Hospital NHS Foundation Trust. He is also a Consultant in General Medicine, Endocrinology and Diabetes, applying this to his special interest in medical disorders of pregnancy. Mark is part of the Chelsea and Westminster Hospital High Risk Pregnancy Team. He holds a strong belief in holistic care and empowerment of women throughout pregnancy, labour and delivery.

As a physician and obstetrician, Mark saw the devastating effects of prematurity first hand. He felt frustrated by his inability to do more for his patients. With his expertise in obstetrics and research, Mark was in a unique position to tackle the problem of premature birth. He founded Borne as a research appeal with Chelsea and Westminster Hospital and the charity became independent in 2016.

As Borne’s Founder and Chief Scientific Officer, Mark has responsibility for framing Borne’s scientific vision and research strategy. He is the Research Director responsible for bringing research proposals and updates to the Scientific Advisory Board for independent review, and is accountable to the Board for the measurement and transparent reporting of progress and impact at regular intervals.

Mark is the Clinical Chair in Obstetrics at Imperial College, and Director of Research and Consultant Obstetrician at the Chelsea and Westminster Hospital focusing on high risk maternity care. Mark began his research early in his career. His PhD, supported by The William’s Fellowship from the University of London, defined the role of relaxin in human pregnancy and was awarded in 1995.

Clinically, Mark initially trained in general medicine, endocrinology and diabetes, specialising in reproductive endocrinology. He set up the highly successful IVF unit in Chelsea and Westminster Hospital. He later trained in Obstetrics and Gynaecology, becoming the only dually accredited Consultant in General Medicine and Obstetrics and Gynaecology in the UK, following which he became the Professor in Clinical Obstetrics at Imperial College in 2010.

Need to ask a question
before booking?
Contact your expert here with
any general questions about
your booking for free
Login to chat

Use a social account for faster login or easy registration.