6th August 2020 should have been baby Billy’s due date, but he arrived almost eight weeks early during the first lockdown.

In this post, Holly shares a very emotional account of Billy’s premature birth, which was brought on due to pre-eclampsia, and how she and her husband were limited to visiting him separately in the neonatal ward for only two hours a day, because of the Covid pandemic.

It was quite a journey for this little family at the very beginning, but her story shows what an incredible powerhouse of strength they all are.

Billy is my third child but my second pregnancy, having given birth to twin boys two years before. I had been planning to have a home birth, and because of the pandemic, I only saw a midwife about 3 times during this pregnancy.

I had upmost faith in my body to grow and birth this baby without any problems. I had previously grown twins to full term, and birthed them naturally with just some gas and air. This was something I had done before and was very confident that I could do again.

I didn’t realise that there was anything wrong. Looking back, all the signs were there but I didn’t add two and two together. I was about 31 weeks pregnant when I noticed that my ankles were swelling a bit, however, we were in the middle of a heatwave and the temperatures were in the 30s – every pregnant lady was swelling. I had a midwife appointment and mentioned it to her, but she agreed with me that it was just the heat.

On the Tuesday, I had a growth scan which showed that everything was well, baby was healthy and the placenta was working perfectly. On Wednesday, I had a headache and on Thursday this turned into a migraine.

Migraines are nothing new to me. I suffer with hormonal migraines all the time so I took some tablets and it went away for a bit. I knew something wasn’t right but thought I would just sleep it off. That’s the last thing I really remember. Everything gets very hazy after that.

I can recall being walked out the front door and seeing two ambulances. I can remember signing a consent form and I can remember hearing my baby cry for the first time. But that’s about it.

It turns out that at 4am, my husband Steve woke to find me having a fit next to him. He called 999 and I was rushed to A&E. I was having eclamptic fits. There was a chance that I could die from it and a strong chance that we could lose the baby. The only way to stop them was to deliver the baby with an emergency section.

Little Billy was born at 11:19am on the 12th June at just 32+1 week’s gestation and weighing 3lb 8oz. It was about as far away from my home waterbirth that I could get.

Billy was taken down to neonatal straight away. No delayed cord clamping. No skin to skin. I was taken to a recovery room.  Due to Covid, Steve wasn’t allowed to go with me in the ambulance to A&E, but luckily I don’t remember any of it, because otherwise, I think I would have been very scared on my own.

Once the doctors had transferred me to the labour ward and knew they had to deliver the baby, Steve was allowed to come. Technically after the birth, Steve wasn’t allowed to stay either, but I was in a private recovery room and still pretty out of it, so I think the nurses took pity on me and let him stay the night.

I was kept in a separate room on the postnatal ward but everywhere I went, there were women with their newborn babies looking happy and in love in the newborn bubble. It was horrible for me as Billy was still down in neonatal. All I had were a couple of pictures of him in my room that Steve had quickly printed out.

I don’t think that I can describe how traumatic it was just ‘going to sleep’, and the next thing I’m told is that my baby had just been delivered.

My womb had been cut open so I was in a fair bit of pain and I had bruises all down my arms from when they had been trying to get cannulas in whilst I was fitting.

To top it off, I couldn’t even see my baby due to Covid. I had to wait for my scheduled appointment and stay only for a couple of hours.

Steve came to visit me once a day for a couple of hours after he had seen Billy. Again, I don’t think he was really allowed, but as I was in a separate room and miserable, the nurses took pity on me.

I’m not a very good patient and hate hospitals, so was dying to get out as soon as possible. I stayed 4 nights in total, being monitored for my ridiculously high blood pressure before they agreed to let me go on medication.

Billy spent just under 4 weeks in hospital. The first week he was on the special care ward in an incubator. There was nothing seriously wrong with him. He had some help with his breathing but not much else. At first, we had to book in to go and see him and were only allowed a few hours a day depending on how many babies were on the ward due to social distancing.

We generally had 4 hours a day split between Steve and me. We couldn’t be there at the same time, so it was 2 hours each. As soon as you got to the neonatal department, you had to change your clothes into something clean and put your other bits in a locker and masks had to be worn at all times.

Imagine not being able to kiss – or even smell – your newborn baby because you are wearing a mask. I think on my 2nd or 3rd visit, when no one was around, I did steal a sneaky kiss on his head.

After a week, Billy was moved from the ward into his own room which meant the rules were relaxed a bit. We were allowed to be there all day, but again, only one parent at a time and once you had left the hospital building, you were not allowed back in so you couldn’t nip out to get some lunch or a coffee, you were basically confined to the room. As long as no one else was around, you were allowed to remove your mask though which was a blessing.

This was such a tough period of time for Steve and me. We had to try and juggle childcare for the twins, I couldn’t drive because of the section and we obviously wanted to spend as much time with Billy as we could.

My family helped me out immensely. My mum took emergency leave from her work so she could look after the boys while I was in hospital, which meant Steve could visit me and Billy. My sister in law came round and made sure the house was lovely and clean while my brother played with the kids. They and my dad helped with lifts to and from the hospital, which we were so grateful for because getting to see Billy would have been significantly harder otherwise.

It was so wonderful to bring Billy home for the first time, but for the first few days it was very surreal. He was 4 weeks old and we had never spent a whole day with him before. 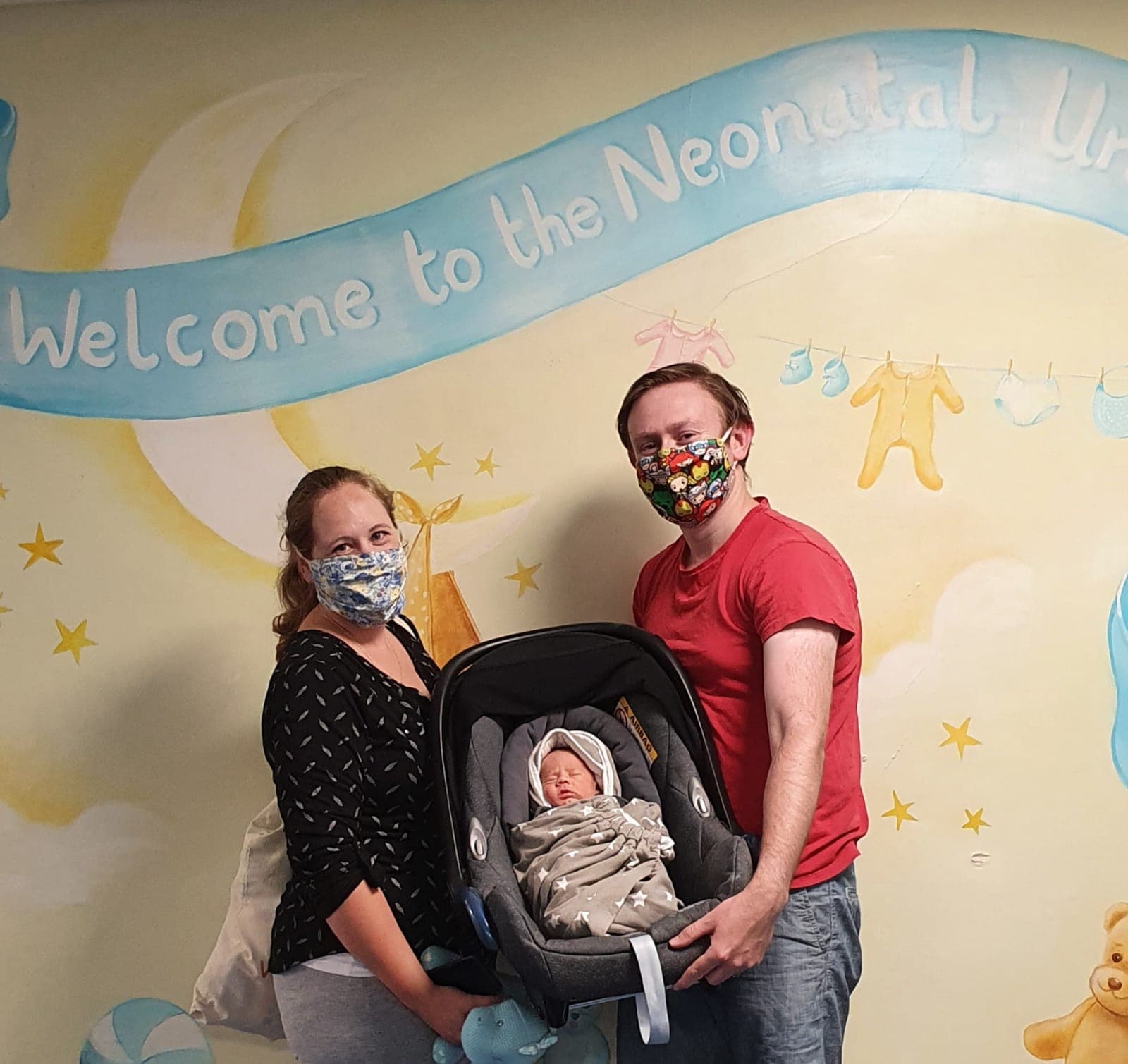 Normally in neonatal, when a baby is ready to be released, the parent stays in a little flat there so they can look after the baby for a full 24 hours whilst having the nurses as support to make sure feeding is established and there are no problems etc.

However, due to Covid, that wasn’t happening. He was discharged, and all of a sudden, it felt like he was ours, whereas before we were just visitors into his life.

The Covid Pandemic meant that we had to push to get a health visitor to come visit us, as Billy needed weekly weigh-ins for a month, and all the weigh-in clinics were closed. We had significantly fewer visitors compared to when we had our twins, as it was only our immediate family, but that was actually lovely as it has gave us the chance to get used to being a family of five. 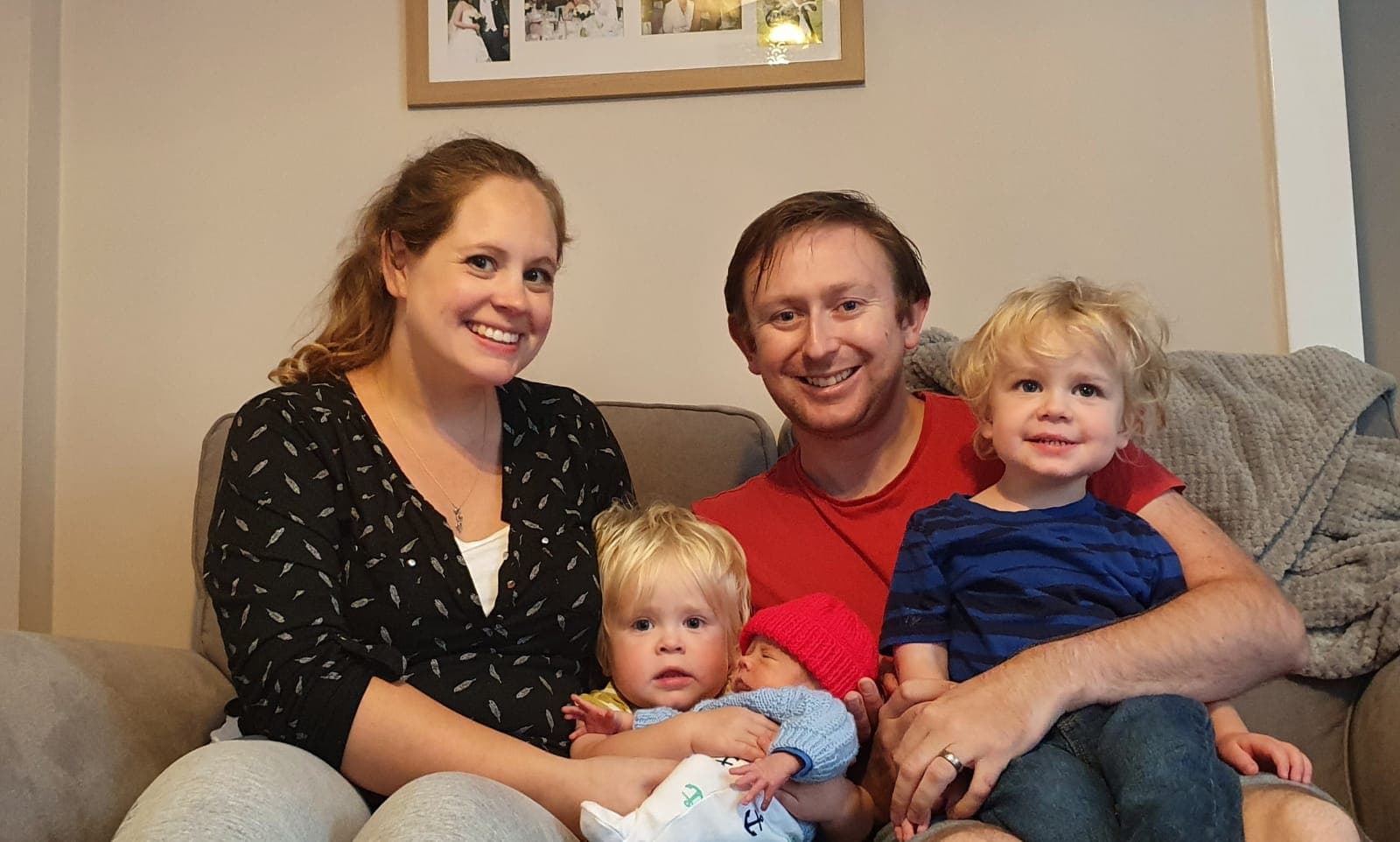 What I’d like people to learn from my story:

The symptoms to look out for are:

As it happened, I recovered really quickly from my eclampsia. It was quick to come on but my body returned to normal quickly as well, and within a month, I was off all medication.

Nearly 2 years down the line and Billy is the happiest little troublemaker with no lasting problems from his early birth and I am now pregnant again!

I am on high alert for any symptoms and have promised my husband I will call the doctors if anything feels strange. I am trying to remain optimistic that just because it happened once does not mean it will happen again.

For more information about pre-eclampsia, including the signs, symptoms, prevention and treatment, click here to read Dr Remi and Dr Jennifer’s article about hypertensive disorders in pregnancy.

How to speak with your employer about IVF treatment

IVF on the NHS: everything you need to know