HomeNutritionAllergyIntroducing peanut into your baby’s diet – and how to keep it in!
Choose a reason
Bullying or harassment
False information
Hate speech
Intellectual property violation
Spam
Triggering Topic (no content warning)
Other

Introducing peanut into your baby’s diet – and how to keep it in!

As a parent approaching or commencing complementary feeding (weaning) with your baby, it can often feel like there’s a lot of information to take in, make sense of and then actually follow. Amongst decisions about when to start, what foods to start with and the approach you wish to take, there are also daunting and anxiety-provoking topics.  One of which is introducing common allergenic foods such as peanut to your baby during weaning.  Not only is this a topic where it can be easy to find conflicting information, a recent study of parents by Your Baby Club found that nearly half of parents (49%) were worried about allergic reactions during weaning.

Over the past two decades, there has also been a complete U-turn in the advice given regarding allergy prevention in children.  About 20 years ago, recommendations were very different (which is why it’s understandable that even now it’s easy to get confused!), with the UK’s Chief Medical officer & COT committee recommending that atopic mothers (those with a history of eczema, asthma, hay fever or food allergy) avoid peanut consumption during pregnancy and breastfeeding, and subsequently avoided or delayed introduction to peanuts in their baby during weaning.

High-risk babies, who were considered those with eczema or another food allergy, were also advised to delay peanut introduction until after 3 years of age. Interestingly, in the years following this recommendation, the prevalence of peanut allergy increased to the point of reporting some of the highest recorded rates of peanut allergy in school-age children (4-5years). We also know that the prevalence of peanut allergy has almost doubled over the past 10 years – specifically within countries where advice was in place recommending avoidance of peanut during pregnancy, breastfeeding, the introduction of solids and in the diet within early years.

Following this, researchers set out to delve deeper into allergy prevention, and measures that could prevent the development of peanut allergy in children.  An interesting observation was made in countries (or populations) such as those in Israel who introduced peanut products e.g. BambaTM during weaning.  These groups had significantly lower levels of peanut allergy than populations with dissimilar weaning practices with peanut, such as the UK.  This observation then helped fuel ground-breaking research including two key studies which took place in the UK, looking into the early introduction of peanuts (LEAP) and common food allergens (EAT) and food allergy prevention in breastfed babies.

These key studies are:

You can read much more about each of the studies via their studies above, but to summarise, these studies have found:

The combined results of these studies have led to the development of some evidence-based guidance for parents about introducing allergenic foods such as peanut during weaning, which we’ve summarised next.

Current advice on the introduction of peanut (and allergic foods) during weaning:

With a focus solely on the topic of the introduction of allergenic foods, such as peanut, during complementary feeding, the take-home messages and guidance for parents are:

*Note: for babies who do set out early – offering these foods as purees instead of a baby-led finger-based food approach is often more developmentally appropriate, but also helps better ensure the goal e.g. actual consumption of the allergenic food

Whilst this latter group are evidently at higher risk of developing an allergy, they are also the group who would be considered to benefit most from this prevention advice. Families with babies who fall into this high-risk group should discuss their individual care with their GP or another health professional if they are concerned**.

**It’s important to remember that the window of opportunity for introduction is, however, relatively small, and the risk of delaying introduction until receiving specialist input or testing in this group of babies needs to be balanced up by parents carefully, taking advice as required.

How do I introduce my baby to peanut? 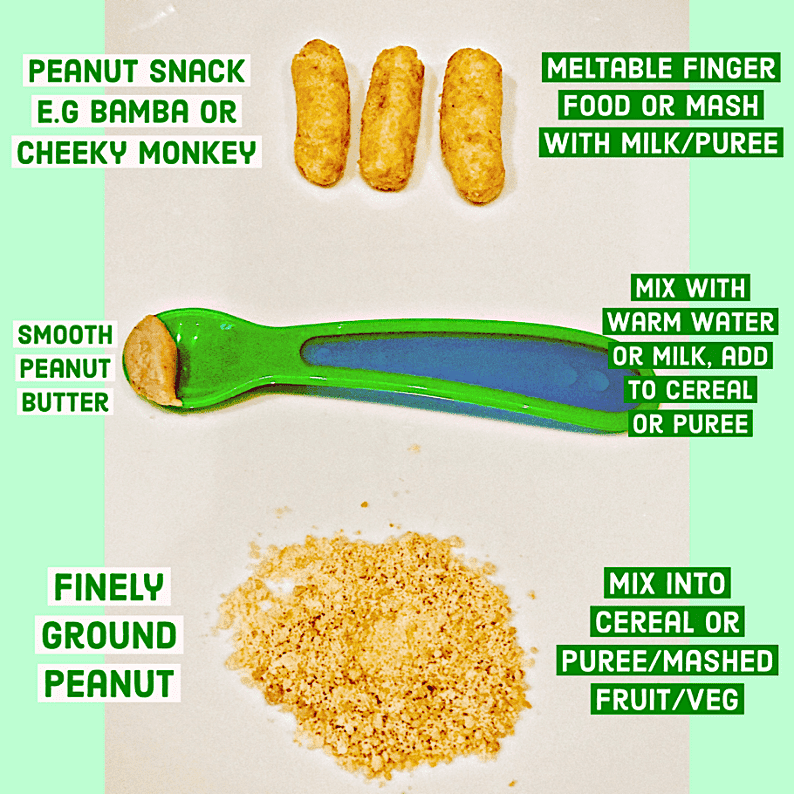 NOTE: BABIES & CHILDREN <5YEARS OF AGE SHOULD NEVER BE GIVEN WHOLE NUTS DUE TO CHOKING RISK.

Practical guidance for on the day

Once I’ve successfully introduced peanut, is that it?

The short answer here is no!  To support your baby’s immune system to maintain tolerance to peanut protein, it’s recommended (particularly in the high-risk group) that you keep giving it to your baby regularly. It’s recommended that, where possible, babies and children have ~2g peanut protein 2-3 x per week:

On top of the suggestions above, you can consider;

Don’t delay in commencing discussions with your GP, Dietitian and/or allergy team if you want to address your individual concerns regarding your baby.

If you would like more personalised advice about introducing allergens to your child, please don’t hesitate to get in touch to see how I can help you.

Feeding children on a vegetarian or vegan diet