Almost 4 years ago, we were blessed with the most precious healthy baby girl named Poppy. She has been the light of our lives. We knew right away we wanted more babies but shortly after Poppy’s birth, the complications for extending our family began.

From a retained placenta, resulting in emergency surgery, to multiple miscarriages and 5 D&Cs, the path to getting Poppy a sibling seemed impossible.

Ultimately we were given a diagnosis that we could not carry another pregnancy successfully due to a thin lining. I knew my body was done and we decided to look into other options.

With 3 remaining healthy frozen embryos, we decided to look into surrogacy options. We looked at a few different surrogacy agencies and ultimately decided to use Conceiveabilities. We were matched with the most perfect surrogate (gestational carrier) for our family.

Fast forward through months of paperwork, fertility prep, legal work, blood tests and so much more, we were ready for transfer. Our amazing gestational carrier agreed for us to transfer 2 embryos. We chose a boy and a girl as we knew this was our last chance for children.

After stress, anxiety, excitement and many more emotions, we found out the transfer was successful and our surrogate was pregnant! We didn’t know yet if both of our embryos stuck or just one.

An unbelievable twist in the tale…

We were so excited, but with my history, I was hesitant to get too excited. At the same time, I was feeling super tired and uncomfortable. I took a pregnancy test and I was pregnant as well. I couldn’t believe it! My ob-gyn let me come in early at 6 weeks to see if the pregnancy was viable. I didn’t believe it, but it was!

My mind was blown, my husband was stressed and we had the hardest time believing there were 4 of our baby heartbeats growing at the same time. Our gestational carrier was gracious enough to switch to my OB in case we delivered around the same time or the babies were in the NICU at the same time.

We attended tons of appointments together and all 4 babies were growing and seemed healthy. My pregnancy was not easy as I bled every single day, passed clots and was in a lot of pain early on.

My clinic could not figure out why but the babies seemed unaffected. We did gender testing and I was pregnant with boy/girl twins as well! We were going to have 2 girls and 2 boys!

Our parents didn’t believe us, many people were confused and many people were fascinated. Our ob-gyn clinic and doctors across Colorado could not believe our story. But it didn’t start to feel real until I hit the 20-week mark.

Our gestational carrier had a pretty seamless pregnancy and was such a champ for carrying twins in a way that appeared to be so easy. We were so grateful for her positive attitude, health and ability to get pregnant and carry our babies.

At 23 weeks, I woke up in the middle of the night to a rush of liquid. I figured it was just blood because I had been bleeding my entire pregnancy. When I went to the bathroom, there was no blood and clear fluid. My husband drove me to the hospital the next morning and the doctors tried to determine if my water had broken.

They couldn’t decide and I was transferred to a bigger hospital that could care for babies earlier. Ultimately, my water in Baby A’s sack had broken. The hospital told me the babies would be early and I would either deliver within 24 hours, in 1 week or in 10-12 weeks.

Little did I know that night that I would be living at the hospital for the next 5 months. I kept the babies in until 24 weeks + 0 days. I delivered via emergency c section and gave birth to two tiny 1lb babies.

The birth of our Rigsby and Rhodes

Rigsby and Rhodes arrived 4 months early, completely underdeveloped and too tiny to even believe they were even real. Their eyes were sealed shut and their limbs looked like toothpicks. Unfortunately, we lost sweet Rigsby girl 24 hours after she was born. She was too tiny and sick for the doctors to save, but we think of her daily.

Then began our 4.5 months in the NICU watching Rhodes fight for his life day in and day out. After many scares, near-death experiences and scary diagnoses, our tiny 1lb baby boy was ready to come home.

While visiting the NICU every single day, we were back and forth to our gestational carriers’ ob-gyn appointments. Rhodes was the same size as the babies growing inside our surrogate. We anticipated Rhodes to come home around his original due date, when the other set of twins were expected to be born.

The birth of Ziggy and Banks

Our gestational carrier ended up delivering our twins 5 weeks early at a different hospital. They were born at 4 and 5lbs. They each spent a week in the NICU. Ziggy and Banks were in the HR Hospital NICU while Rhodes was still in the NICU at the U.

Ziggy and Banks were born at the end of August and came home at the beginning of September on oxygen, while Rhodes stayed in the hospital until mid October. We were finally able to bring him home to meet his siblings.

Poppy was able to finally meet Rhodes after months of Mom and Dad leaving her to be with her sick brother. We are so blessed with 3 sweet babies who, gestationally, are just days apart, and actually less than 3 months apart.

Rhodes is a miracle, born at exactly 24 weeks, who is defying all the odds. He is still on oxygen but is doing amazingly and surpassing all his milestones. We now have 4 kids all aged 3 and under and the babies are often referred to as ‘miracle triplets’.

It’s been quite a ride but we are so thankful for our amazing gestational carrier and for the doctors, nurses and specialists who helped Rhodes beat the odds. 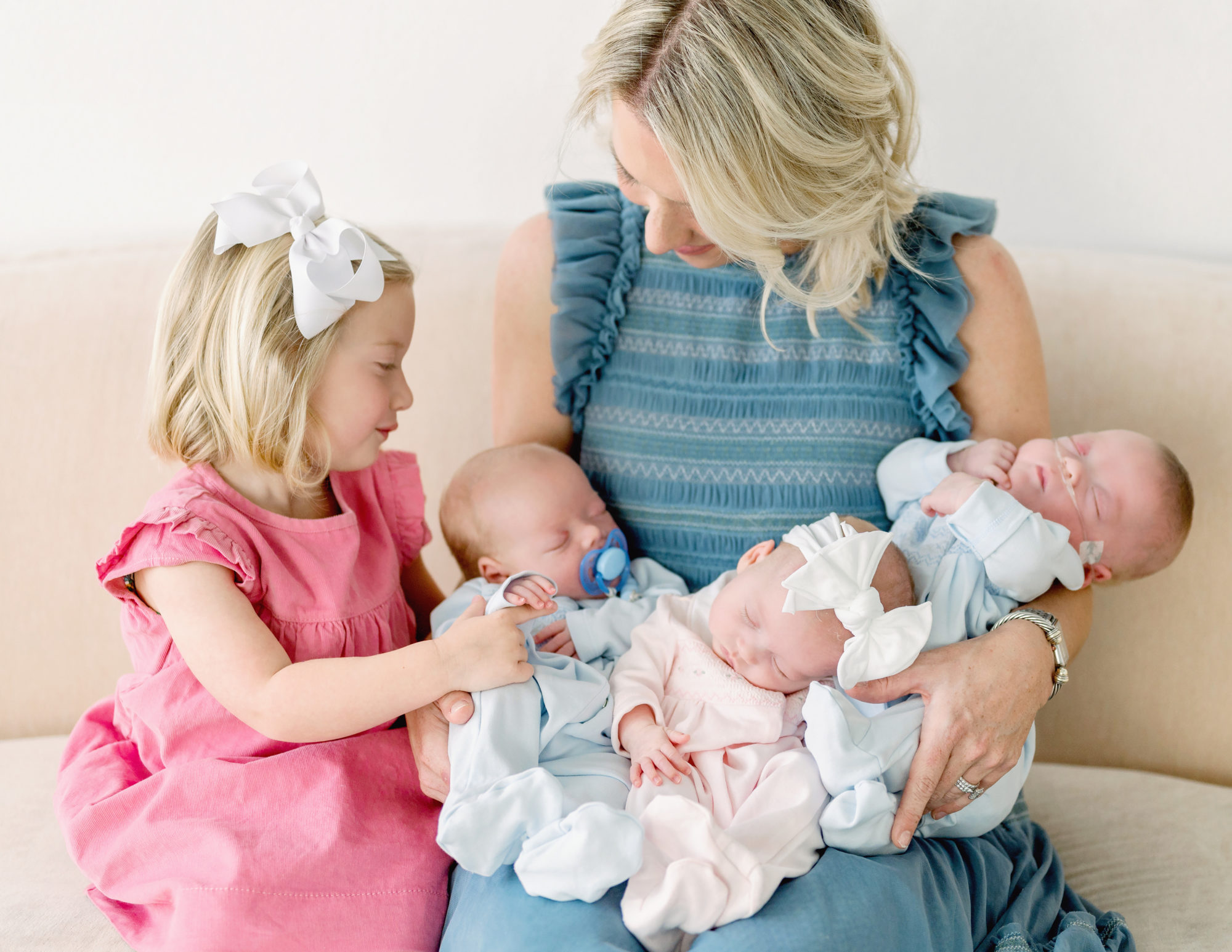 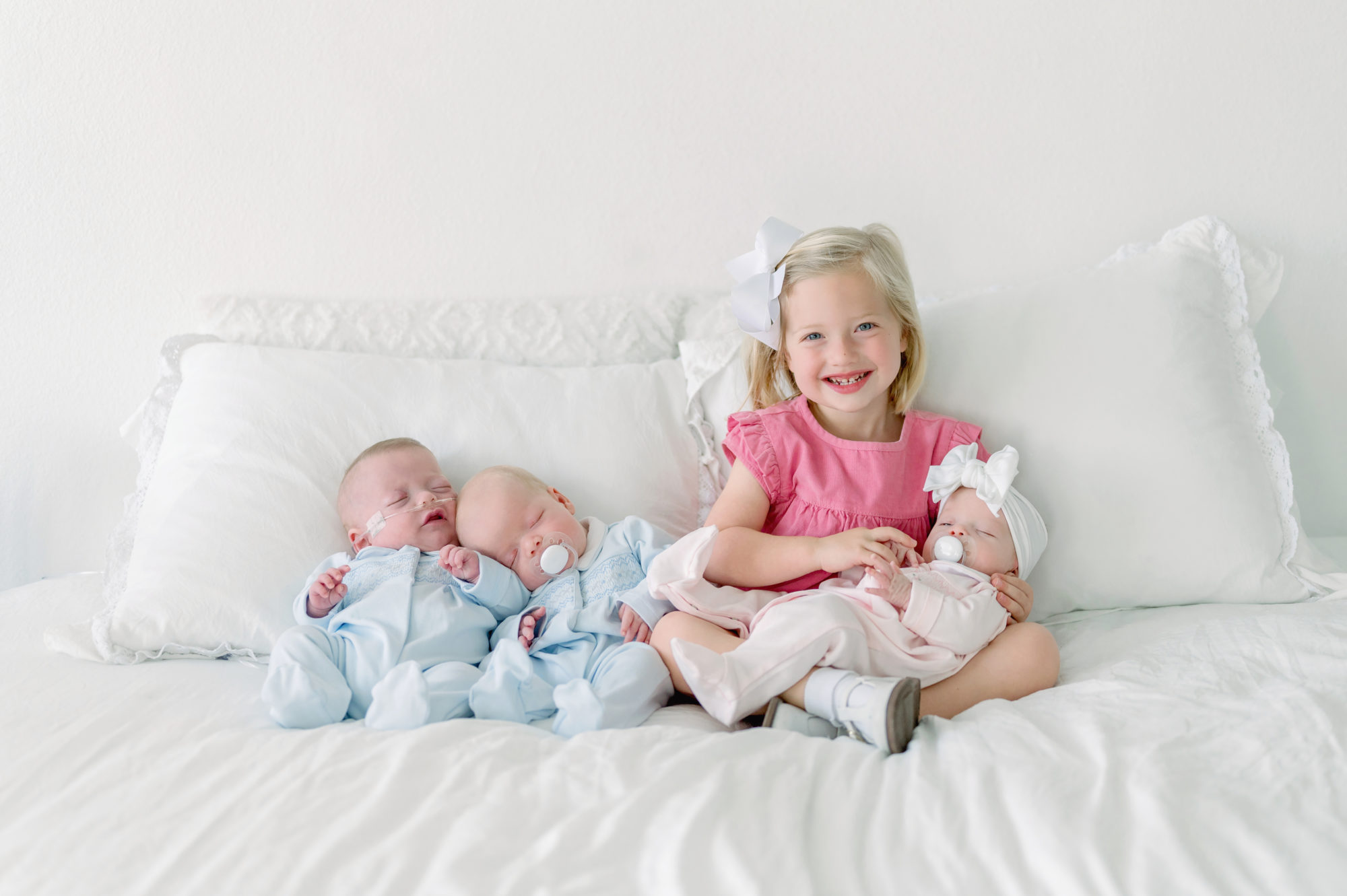 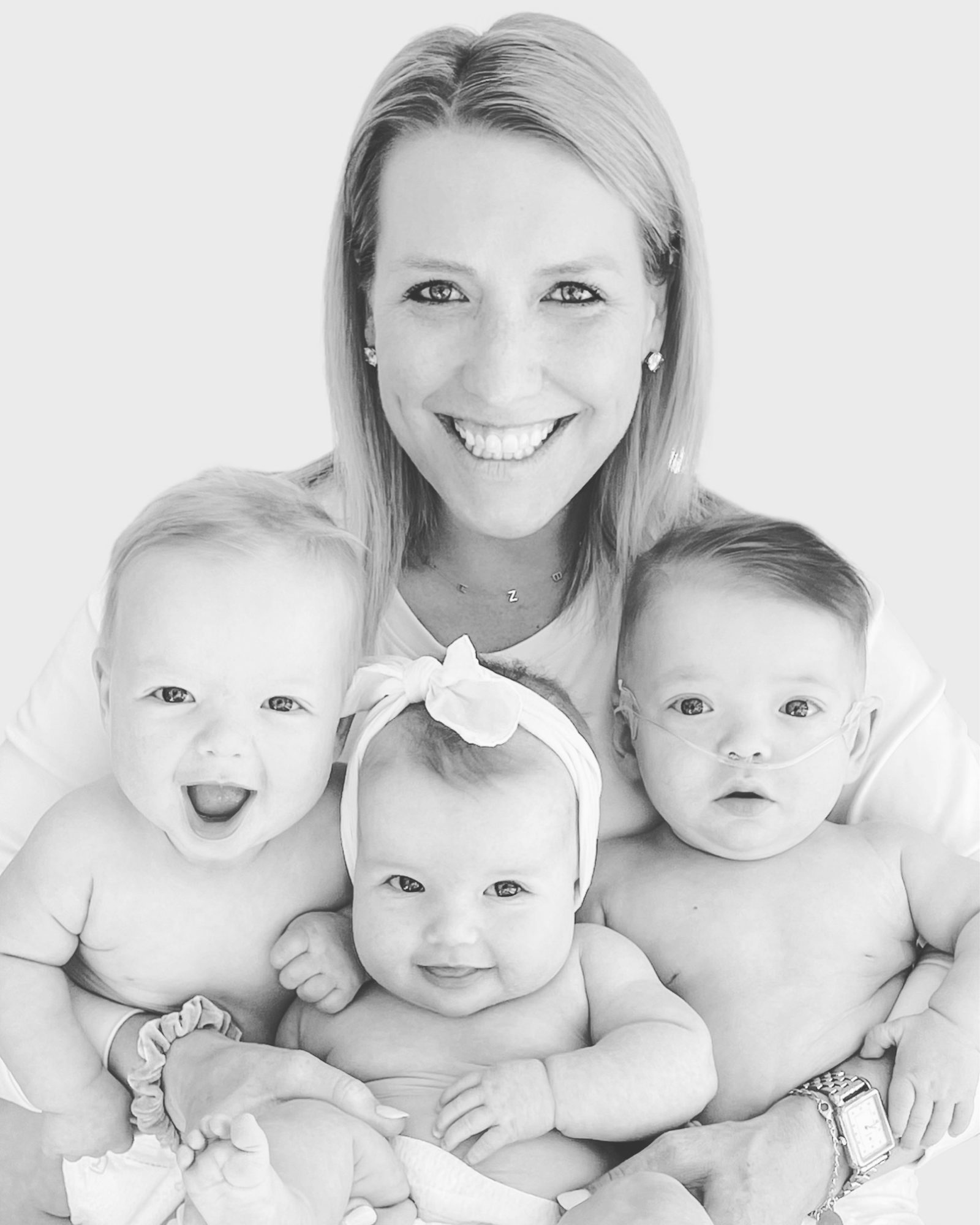